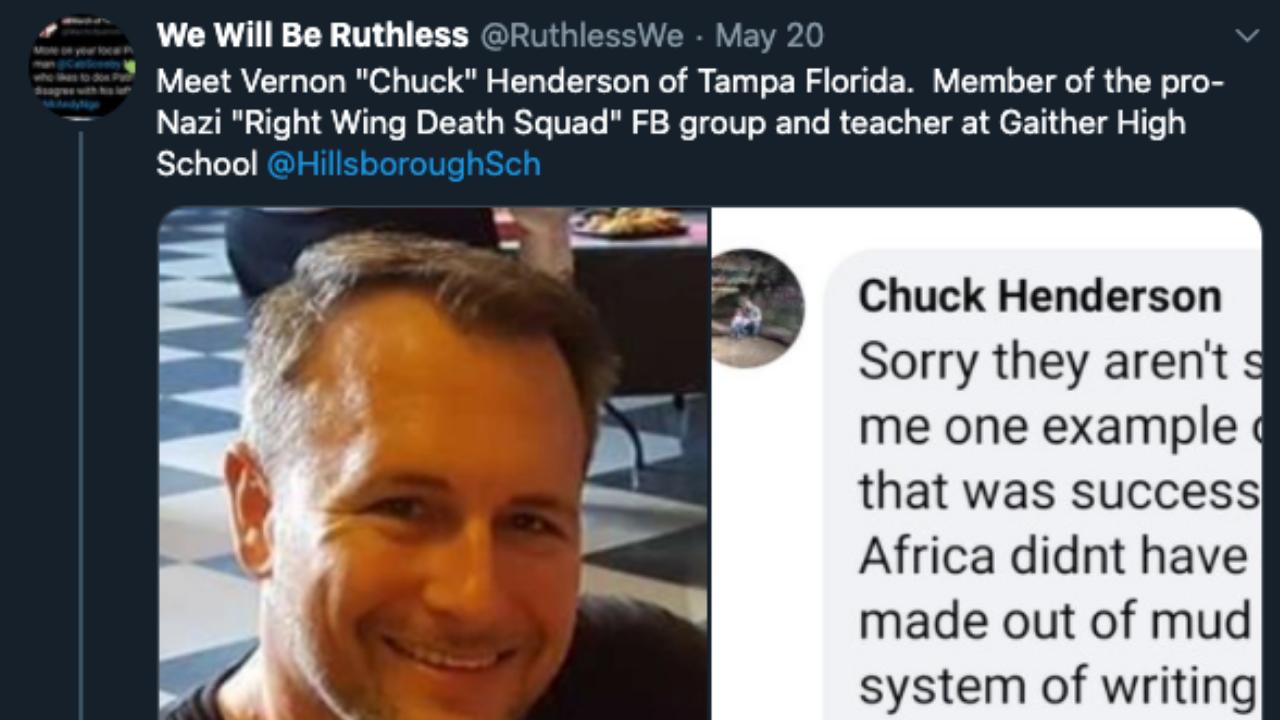 On May 20, 2020, Vernon “Chuck” Henderson was exposed as a member of the pro-Nazi “Right Wing Death Squad” (RWDS) Facebook Group by We Will Be Ruthless.

I was notified of the alleged incident on May 21, 2020, and the information was posted publicly on Facebook requesting transparency and answers. I promptly received correspondence from School Board Member Cindy Stuart. Based on her response that it was fake and being investigated, I removed the original post.

Hours later, I received a Facebook Message from Chuck Henderson. He said, “If you’re interested I can set the record straight. I know we have mutual friends.”

We engaged in conversation and he alleged that a student sent his information to an “Anifa group that targets people with public profiles/jobs.” He continued to allege that they “took my name and photos and attached them to these horrible racist, misogynistic, and even homophobic posts and then shared them with the district on District on Twitter. (I don’t even have a twitter account).”

So I continued to hear Chuck’s story.

“So as soon as I figured out what was happening (8am) *keep a mental note of this*, I contacted my Principal, Professional Standards and the police. Oh it looks terrible…incompletely understood the anger…I would be pissed if a teacher in our district shared/had those beliefs.”

You would think that Chuck is innocent because he is denouncing those actions on social media. He continued the narrative that we have “evil people in this world” and he “would never even think those things much less post it.”

Sound convincing right?  Remember when Chuck said he found out what has happened at 8am. After auditing his Facebook page, he changed his Facebook Cover image at 6:59am and his Facebook profile picture at 7:23am. So okay. It might not be exactly at 8am but let’s continue with the rest of the story. 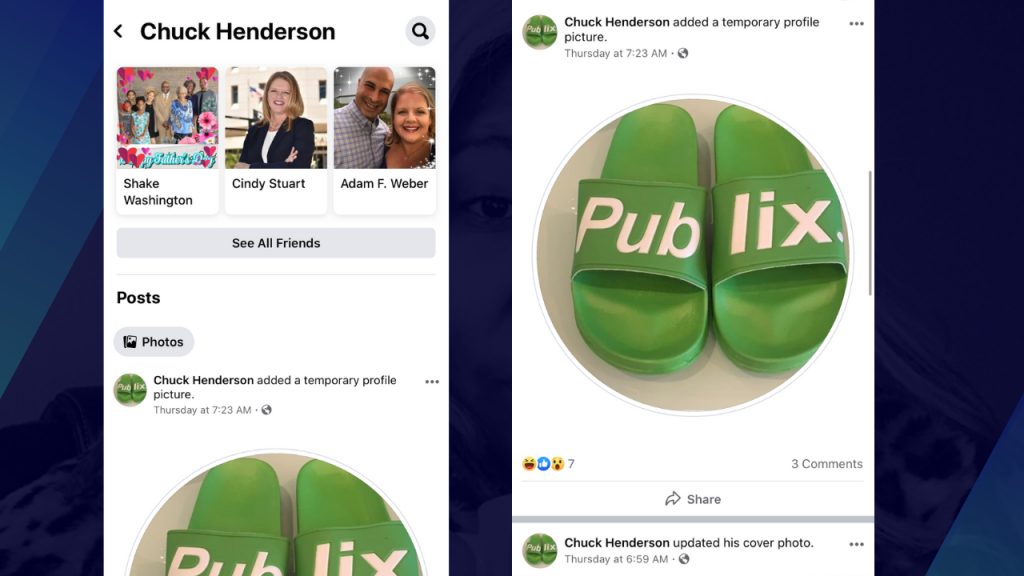 I asked Chuck Henderson questions giving him the benefit of the doubt because I do understand hacked accounts are possible. He deserves due process.

He brought up that he grew up by Robles Park, as if that is relevant. I’m not from Tampa or visited Robles Park. After asking the community, it appears he brought this up as an “I can’t be racist. I grew up around Black people.” I can only speculate this but I’m a woman of receipts. I desired to learn more.

I searched on the same Twitter feed from We Will Be Ruthless and I saw educators, students, and parents make comments. The original post eventually made it to Facebook and people shared their experience with Chuck. It wasn’t really supportive of Chuck. In fact, it was painting a picture that he has caused some harm in our school district. I guess this explains why he was demoted and transferred to Gaither in the first place. His employment record is unclear.

I prayed for him hoping that he would clear his name. Obviously, I didn’t want the receipts to be true. I asked Chuck if I can share our conversation on Social Media and he gave me consent to do that. I told him that I was thankful for him allowing me to share his story and that the truth will always come in the light. He said that he appreciated me giving him the benefit of the doubt before jumping to conclusions. 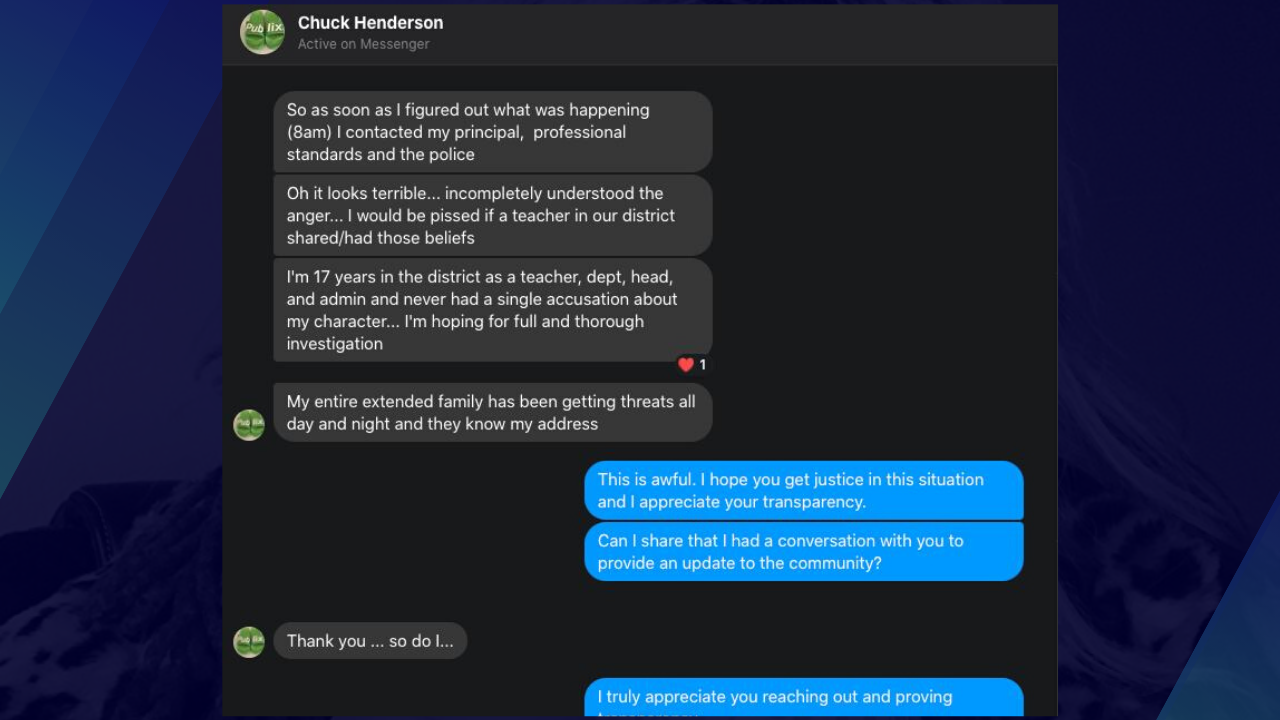 More of conversation is linked here:

Last Update for the Night Regarding Gaither HS Teacher Mr. Henderson: I spoke with the teacher at Gaither on Facebook…

I continued to search for answers and contacted We Will Be Ruthless. I knew this would be swept under the rug if they were so quick to say this was fake. Something didn’t seem right about this!

I asked the organization the process of Chuck being linked to the pro-Nazi Right Wing Death Squad Facebook group. I asked them if they believed his account was hacked based on the receipts they posted. I asked them about the history of their organization and their intention. They sent me thorough responses. Here’s the link to view it:  https://teachingfortheculture.com/Ruthless

Chuck Henderson is the 4th member to be exposed in this group. The Right Wing Death Squad Facebook group is a private group that you have to apply to gain access. We Will Be Ruthless exposes people who are members of Southern Poverty Law Center designated hate groups. This was a strategic move and nothing personal against Chuck Henderson.

On Twitter, I saw the screenshot of my conversation with Chuck linked to another screenshot from the pro-Nazi Right Wing Death Squad Facebook group with the following caption. “Henderson has now deleted his FB account, but not before he messaged a co-worker. The profile pic is the same. It is the same account. Chuck’s account.” I looked at the screenshot that’s linked to the same profile picture Chuck messaged me on. It appears that someone was exposing him in Messenger and he took a screenshot and captioned it “I got these tonighr”

Chuck blocks the name but here’s part of the message, “Not gonna be good enough to take your account semi private…it’s curtains on that career of yours. People know. More people will know tomorrow. Maybe shouldnt’a popped off so much on the computer. I see you chucko. I’ve got the receipts. If, for some reason, the school district doesn’t fire your ass based on what’s out there, I’ll send them more. This is what I do. I watch for people like you. It’s boring, mostly. Occasionally, something hits. Like, for example, an openly racist public school teacher. When that happens, I follow up. In this case, I have followed up.”

In the same screenshot Chuck responds, “I have no idea what you are talking about? Care to” the rest of the message didn’t fit in the window. 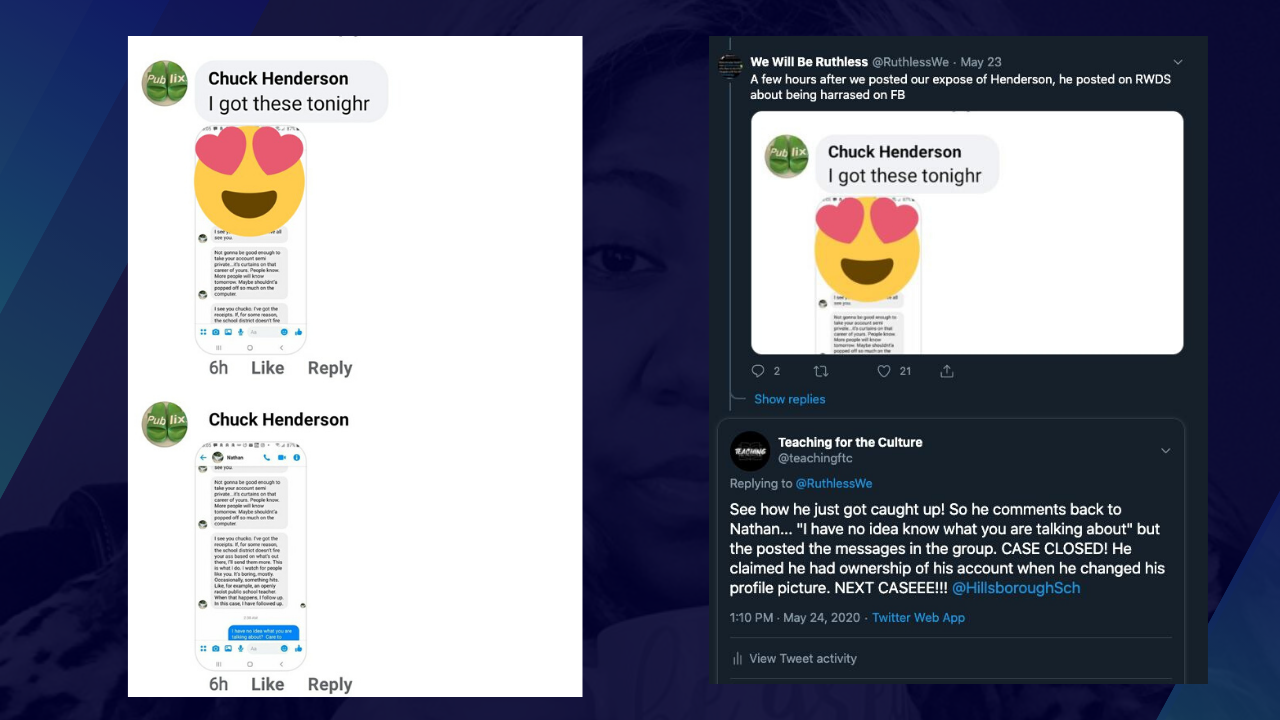 If you look carefully at the screenshot the first message was received on 5/20/2020 at 11:37pm and his response back was at 2:38am. If you look at the top left corner, the screenshot shows timestamp 3:05. He knew what was happening at 3:05am when he took a screenshot and posted it in the group.

Chuck was on the record saying that once he changed his profile picture he had access to his page. Chuck was under the impression that the only screenshots that identified him were with him and his son in the profile picture. Chuck Henderson failed to realize that We Will Be Ruthless was still following his digital footprint to ensure the district has enough information to raise the alarms of his conduct. Chuck Henderson failed to realize that the content on Facebook doesn’t delete when your account is deactivated.

Based on the facts presented, Chuck’s Facebook was never hacked. If he wants to prove it, file the report with the police and allow them to analyze the data. You can’t scrub everything online but it’s no need to get the police involved. Chuck Henderson deactivated his profile and that’s why We Will Be Ruthless thought he deleted it. That also explains why they had screenshots of his content because they weren’t deleted. Chuck would have to manually delete that content.

So I have some follow up questions. When was Chuck’s account hacked? When he thought it was funny that people were calling him out at 3am or when they escalated the exposure and contacted Hillsborough County Public Schools? We Will Be Ruthless organization captured the screenshot as soon as he changed his profile picture and the link that places this all together was when he messaged me! Just because he changed his profile picture, doesn’t change the content on a deactivated page. 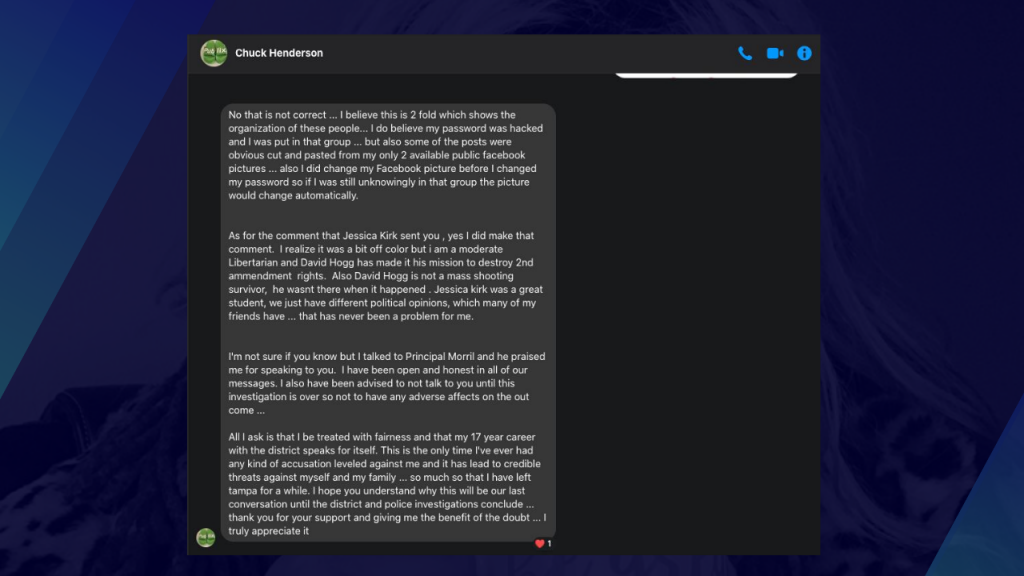 He clearly doesn’t know how Facebook works! When your account is deactivated, group admins may still be able to see your posts and comments, along with your name. Need further proof, it’s posted under “Help – How do I temporarily deactivate my Facebook profile?” – https://www.facebook.com/help/214376678584711

He told me he had no other content with the new profile picture because… let’s use direct quotes, “I do believe my password was hacked and I was put in that group… but also some of the posts were obvious cut and pasted from my only 2 available public Facebook picture before I changed my password so if I was still unknowingly in that group the picture would change automatically.”

Well his new profile picture links to the same pro-Nazi Right Wing Death Squad Facebook group. That same group that is private and it takes 2-4 weeks to get in. The same group with the vile and racist comments he posted. We Will Be Ruthless has the 4th person exposed. Meet Chuck Henderson! Do you really think someone hacked him to gain access to a private group, applied to get in the group, and posted in the group with Henderson actually knowing about it? Over the course of a few months? Not likely since he was active on Facebook during his involvement in the Right Wing Death Squad Facebook group.

What sealed the deal was Chuck being bold enough to message me. We Are Ruthless found it and debunks the claim that he was hacked based on his digital footprint: https://threadreaderapp.com/thread/1264287023835168769.html?

The same profile picture he messaged me with is still linked to the group. I guess that’s why Chuck blocked me after I sent him that screenshot. They found him and I placed this in a neat bow for the District to move forward! His due process is up! He should have followed School Board Member Cindy Stuart’s advice and kept quiet.

The organization has to be 100% sure of the identity of the person because that’s a liability for them. The district would know that if they reached out to them. Asking the source is Step 1 when conducting investigations. They have nothing to lie about. Chuck does! We Will Be Ruthless said, “And for the record, nobody from the school board, district, or the school has reached out to us.” 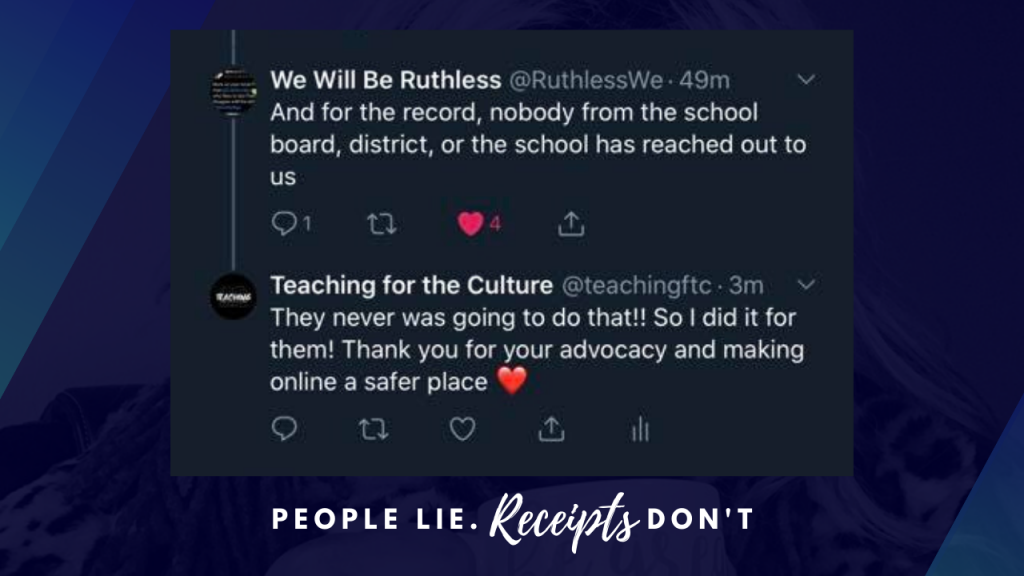 If you refer back to my conversation linked to this petition, the organization was quoted saying, “We see this in the way the PTA initially responded, the school board member who decided this was all fake before any investigation was carried out, the person on my feed who claimed there already had been an investigation that exonerated Henderson and then had to backpedal…etc…I sense a whitewash underway.”

It was going to wash away until the puzzle pieces came together and linked Chuck’s new profile picture in the same pro-Nazi Right Wing Death Squad Facebook Group. When Chuck said this was organized, he is absolutely right! The organization worked hard to vet the information (remember liability) before the “REVEAL” on 5/20/2020 at 10:02pm. Once he realized he was caught, he started making modifications to his Facebook profile but failed to delete the already posted content. Facebook doesn’t delete data when you deactivate it. 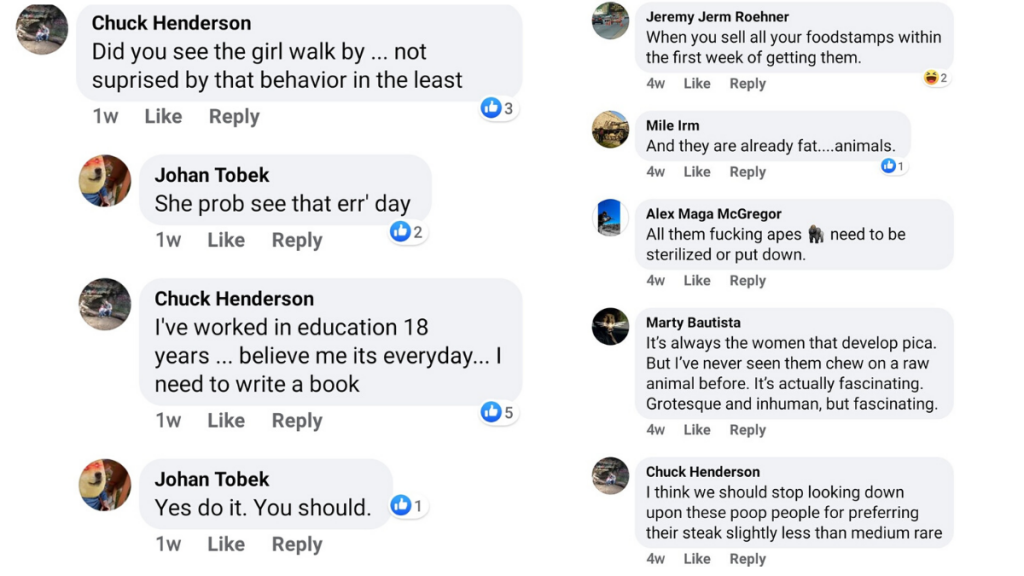 Chuck Henderson should be terminated and his information should be submitted to the Florida Department of Education. Stand up for what’s right! Chuck is a liar and a racist. Chuck is exposed!

Thank you We Are Ruthless for making online a safer place and fight against hateful language online! When Chuck told me his side of the story, he told on himself. Just because you deactivate and change a profile picture, doesn’t mean the content in groups go away. The digital footprint followed and Chuck’s statements did not add up!

Hillsborough County Public Schools… do the right thing! He’s caught with his own digital footprint. If you want to watch the video breakdown, here’s the link: